A large renewable energy provider was looking for a way to avoid unplanned outages related to the circuit breakers they use daily to switch between generator and solar power at one of their locations. In the previous year, one breaker had slowed to the point that the breaker fail scheme was forced to operate, causing them to experience an outage at the plant. After performing lubrication maintenance to the breaker and bringing interrupting times back within acceptable limits, a Dynamic Ratings’ Breaker Performance Monitor (BPM) was installed in May 2021 to monitor the health of the asset.  This was done using non-intrusive sensors to simplify ease of installation and prevent introduction of new errors.  The BPM provides the end user with continuous online monitoring of breaker interrupting times for each operation.  Condition-based monitoring provides full visibility to the performance of breaker, mitigating risk until a scheduled outage in January 2022 could be reached.  During the planned outage a more thorough examination of the breaker’s mechanism could be performed beyond simple lubrication short term corrective action previously taken in May. 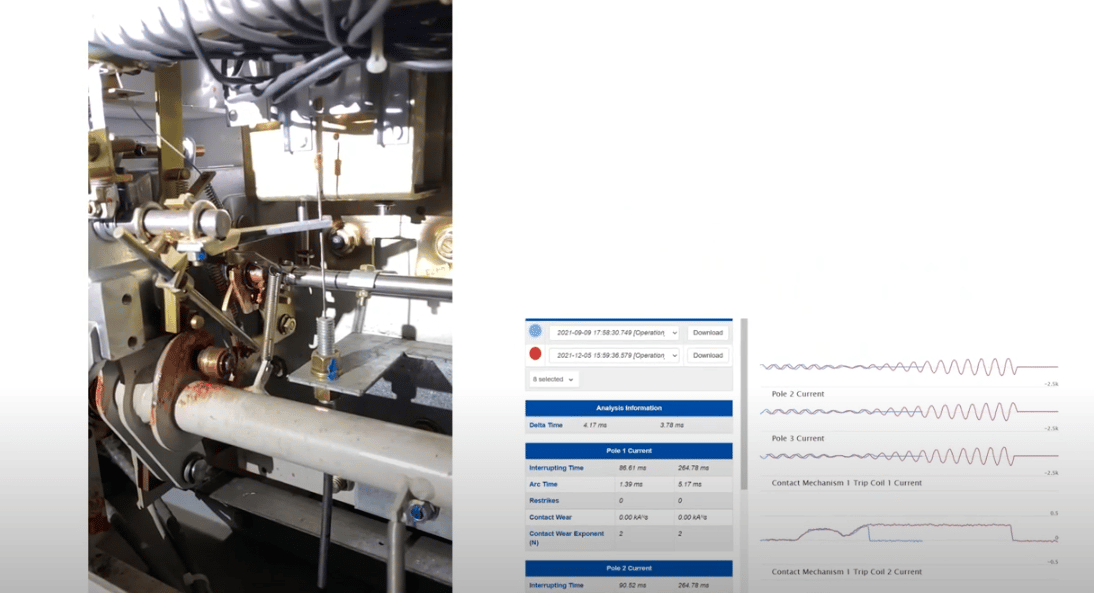 The Breaker Performance Monitor provides trip coil signatures for each operation.  As indicated in the waveform capture comparisons of the initial operations after the May installation, the breaker was operating in a consistent manner and was within nameplate rated interrupting time parameters. Due to the responsibility of this breaker to switch between steam generation and solar power, there was a minimum of two breaker operations per day, allowing a large amount of data concerning the breaker’s mechanical condition to be gathered over a relatively short time period.

The breaker continued to operate within specification, producing perfectly matched trip coil waveform signatures until October of that year at which point a deviation of around 4ms was observed in the trip coil waveform.  This slowing of the breaker continued to progress with subsequent operations, until the interrupting time had doubled the rated interrupting time as illustrated in the waveforms captured in late November.

The trip coil waveform overlay from May to November shows the gradual mechanical slowing of circuit breaker operation.    This information allowed the asset manager to determine if immediate action was required or if maintenance could be performed during the planned January outage.  After review with vendor, it was determined an immediate outage was necessary so additional lubrication could be applied to prevent a breaker failure operation.  The breaker interrupting times were already exceeding the time settings of the breaker fail relay scheme, but due to the mechanical deficiencies in how the breaker was opening, it was not asserting breaker fail scheme logic. Phase currents were dropping below thresholds during the initial part of the trip operation, causing relaying to detect a full open operation when one had not actually occurred. The monitor detected this as a restrike and provided an alarm to the asset management team. When the breaker was removed from service for maintenance, offline timing tests were performed which verified that the monitor provided accurate notification of the breaker slowing two months prior.  The monitor did not just provide information that breaker was exceeding interrupt time but also provided an accurate diagnosis of the lubrication issues that were causing slow operations through comparison and assessment of the waveform signatures.

The Breaker Performance Monitor was able to detect changes in the performance of the breaker well in advance of protective relaying that was being used. It allowed a considerable timeframe for repairs to be scheduled before the breaker mis-operation reached a critical stage. A single unplanned outage would have resulted in a loss of revenue due to lost generation distribution. The cost of monitoring was worthwhile. Dynamic Ratings Breaker Performance Monitor is the most comprehensive breaker monitor currently available and provides the user with critical information concerning breaker condition including: